‘Chris Murphy with Strings Attached’ is a corporate music outfit that marries timeless & contemporary pop songs with classical arrangements. Fronted by award winning singer/songwriter and former Australian Idol star, Chris Murphy and backed by Tres Classique, Perth’s premier wedding and special events classical music group, ‘ Chris Murphy with Strings Attached’ has a repertoire ranging from ‘The Beatles’ to ‘Ed Sheeran’ and everything in between.

Filmed and Recorded by Rob Agostini for Soundbaker Studio.

O Come O Come Emmanuel  is a Latin Hymn and is commonly sung during Vespers in the final days before Christmas.

The tune was discovered in a 15th-century manuscript containing the melody in the National Library of France.

Listen to this beautiful French Carol as performed by our flautist Tresna Stampalia and harpist Catherine Ashley by clicking on our photo below.

WE HOPE YOU ENJOY IT AS MUCH AS WE ENJOY PLAYING IT! 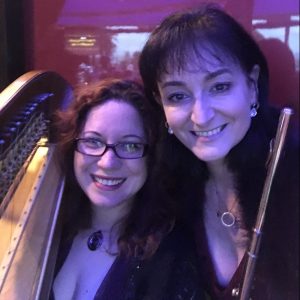 This versatile duo combination is one of the most exquisite choices to add   unique elegance to any wedding service.